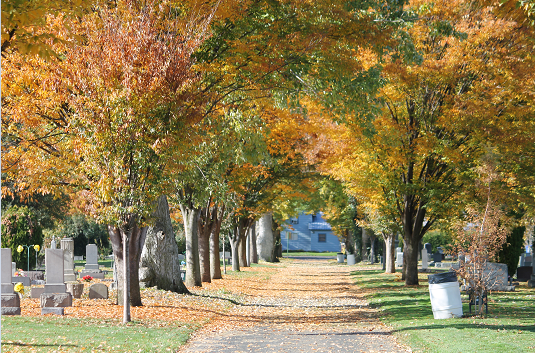 In 1992, students from Webster Elementary School chose to create a State Tree Grove at Normal Hill Cemetery as their Arbor Day project. Under the supervision of former City Parks Department Director Mike Moon, 34 trees were planted, representing 46 states and the District of Columbia. There are at least eight species of oak in the State Tree Grove. Some of the original trees did not survive, and a few of the states have changed their state tree, including Utah, Kentucky, Arkansas and North Carolina.

The practice of naming a "State Tree" began in 1918 when Virginia’s legislature selected the flowering dogwood as representative of the state. Texas followed suit in 1919 by designating the pecan as its state tree. In 1931, Indiana selected the tulip tree, as did Kentucky and Tennessee. Idaho selected the western white pine in 1935. All 50 states and the District of Columbia now have official state trees.

In November 2004, Congress passed and President George W. Bush signed the bill making the oak the official National Tree after a nationwide discussion and poll promoted by the National Arbor Day Foundation allowed thousands of people to make their choice known. As there are more than two hundred species of oak in the United States and most of those have been important to the country, the oak tree family was selected.

Today, the City of Lewiston Parks and Recreation Department and Normal Hill Cemetery and Arboretum support and maintain the grove among the hundreds of trees at the cemetery.

Maps of the State Tree Grove are available in the Cemetery Office. Look for the distinctive blue tags that identify state trees, most of which are along this State Tree Lane. However, a few are scattered about the cemetery. If we have more than one example of a given species, they should have the blue state tree identification tag.